Pictures From Bowties vs The World

As you can see, a lot of fun was had by all! 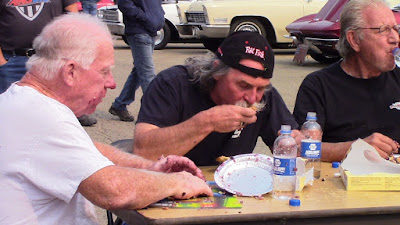 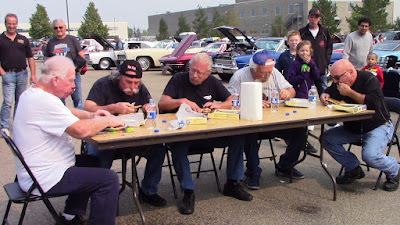 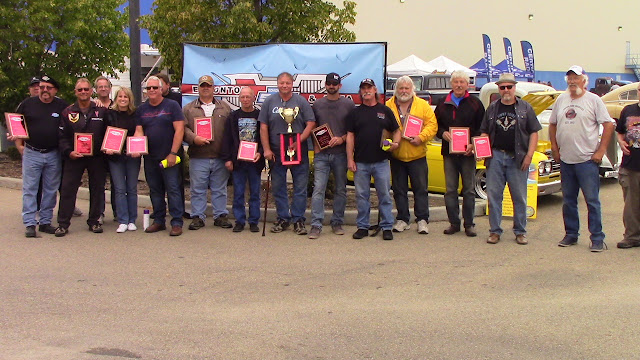 There were no minutes provided from the July meeting.

Treasurer’s report for this month was also not reported due to Jim’s absence.

The club’s Photo shoot at the Burger Baron on 118 Ave./125 st. was held a few weeks ago. We were missing a few club members and their “rides”.. Norm & Jim have reviewed some of the photos that were shot & some other photos were not acceptable for what we wanted.. Club members to decide on the photos, that will appear on our 2019 Club Calendar at the next meeting. The calendar will be on sale once they are produced. Price not confirmed as of yet.

The main focus of this meeting is to get ready for the 18thAnnual Bowties vs the World Show n Shine.. The member pre event BBQ is slated for August 18 @ Norm Messervey’s house. This is pot luck style & BYOB.. The club will provide the Burgers / hotdogs & some non-alcoholic beverages. Norm’s address is 19016-75 Ave. The Show n Shine is @ a new venue as Canadian Tire (where we were the last two years) did not offer to do anything for us this year… We do not know what the entry count will be, due to our event is at a new venue & there are numerous Show n Shines slated around town that day.. Jim is hoping for 80-100 plus.

To be successful we will need all members to help out during the day. All members who are coming out to help & set-up, please meet at 8-8:30 a.m on August 25. Jim K. to stay overnight the night before to assure the parking lot is clear for us & get a early “jump” to set-up at the location.

A grassy location on the main Blvd in front of the NAPA building has been noted for all Tri-5’s entered. This is a proven attention grabber, so to speak.. Shawn G. has confirmed the portable washrooms will be set in place & Jim has applied for a special permit from the City (oscam permit) to have crosswalk signage put up.

Armand L. will provide the Trash cans for the event.

The businesses just across from NAPA on the south side of 111 Ave have ok’d the use for public parking. The crosswalk signs are to be placed on 111 Ave., so the public can cross safely. We have to provide crosswalk assistance for the public when crossing 111 Ave. All handicap parking stalls in front of the NAPA building must be open for their customers. The whole Eastside of the NAPA building is ours to use, plus if needed the large grassy area just north of the parking lot can be used as well. The area will be mowed for us.

Certified Radio has provided a CD player for raffle prize & also Maximum Mechanical has provided a “Drone” package too. The CD player is the Adult prize & the Drone is the Kids prize, Tickets are $2.00 for the adult prize & $1.00 for the Kids prize… Bouncy castles have been arranged to be out there for the kids, they must have a waiver signed by their parent & have a wristband on at all times while they are on the castles. Food trucks and an ice cream vendor has to be confirmed, Jim K.to look after that. Fat Franks has confirmed his appearance, however…

Vendor row will be along the eastside of the NAPA building & just a donation to our cause or a door prize is all that is needed from the vendors.

D.J will provide his own power supply but the call is out to have any member to bring one out as a back-up. Don C. & Jim K. to bring out their machines.

The ladies of some of the members will work at the reg. table. They are as follows: Zoe Messervey, Laurie Cornish, Linda Kennedy & Marg Lindgren… THANK-YOU ladies for your assistance, we couldn’t do it without you !!

Roy M. to take entrant photos again this year in front of the Club Banner between 9-11:30 a.m.

We hope to have the class awards handed out & the event conclude by 3:30 p.m…

The 2018 Bowties vs the World Show n Shine

***after a Ballot Review, Kevin Sterling 1968 Chevy P/U tied for 1st, an award will presented to him ASAP***

Thank you to all of our many sponsors: Keeping the Tri 5 Alive here in Edmonton and Beyond. Our Thanks to all our sponsors! Keep the...

See you at our monthly meetings at the New West Hotel the First Wednesday of every month!
Next meeting: October, 3, 2019 at 7 pm.
Be there at 6:15 pm for food and some great car conversations.

Thank you to all of our many sponsors: Keeping the Tri 5 Alive here in Edmonton and Beyond.
Our Thanks to all our sponsors! Keep the Try 5 Alive and support these fine businesses 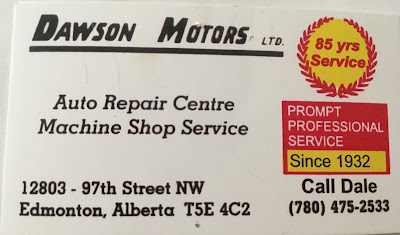 Norm Messervey - Membership Director
We are always happy to answer any of your questions!