Upcoming Events for the Month of August 2013

The following is a list of events for members and enthusiasts to bring their vehicles out to, located in the greater Edmonton Area for the coming month.

Edmonton 567 club Member Jim Kennedy was interviewed by 630 CHED's Bruce Bowie at the Cougar Paint & Collisions Retro Days at Northlands Park in Edmonton on July 13, 2013. Jim talks about his 1955 Chevy and the upcoming Bow-Ties vs. the World Car show on August 24th.

We regret to announce the recent passing of Joyce Urbaniuk, wife and sidekick of former longtime member Horst Urbaniuk of Langley BC.  Both Horst and Joyce were great assets to the club with an extensive history of participating and helping with Edmonton & Area 567 club events.

On behalf of the Edmonton & Area 567 Car Club, we'd like to pass our deepest condolences to Horst and his family at this difficult time.
By Website Admin - July 15, 2013 No comments:

Special thanks to all the members who recently attended the Camrose Car show with their rides.  Also a big thanks to Roy Marko for bringing out the club trailer for display purposes.

Getting out to these events is not only a great way to show off your hard work and dedication, but to promote the club itself.  Once again, we're very happy to see such activity and proud to be keepin' the Tri-5 Alive! 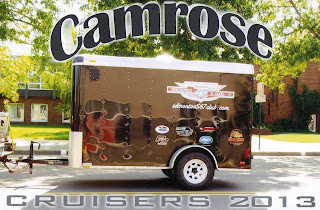 For any interested members who can and/or will be in the Bonnyville Area on July 27th: 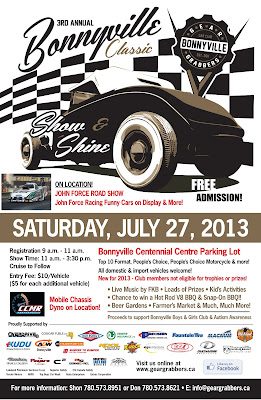 Minutes of the July 3, 2013
Monthly Meeting of the Edmonton 5-6-7 Chevy Club
held at the premises of Fargo’s Restaurant located in the
Capilano Shopping Centre at 5804 Terrace Road, Edmonton, Alberta

1.      Call to Order
The Meeting opened at 7:05 p.m. and there were 19 members.  Minutes of the last monthly meeting were read by President, Roy Marko.

2.      Camrose Show and Shine
Our Vice-President, Daymion, reported that the Camrose Show and Shine date had to be rebooked for Saturday, July 6, 2013.  He said that the vehicles would cruise around Camrose at 6:00 p.m.  It was estimated that about 6 Club members would attend and that they would meet at the Looma Esso Station at 9:00 a.m. Saturday morning.

5.      Bow-Ties vs the World Show and Shine
Jim Kennedy reported that a new welcome flag will be used this year at our Show and Shine.  He said it was estimated that 120 picture folders will be needed. The new club 4X8 banner is done &
The awards will be completed in Early August.. Ballot sheets also need to be printed, will be done in early August as well.. Northgate Centre has goodie bags ready for the show..

Jim also said that members of a city Roller Derby group may have its members attend our Show and Shine. Plus the group “MADD” will be at the show with their message & booth..

Jim Kennedy said that he was still trying to get a skipping demonstration by a teenage club attend our Show and Shine. If anyone knows of a group that could use some exposure, call Jim..

Jim Kennedy said he still needs more door prizes for our Show and Shine and to have business cards to attach to the donated prizes.
And there is Vendor space available as well, have them contact Jim… @ 780-473-4559 or
e-mail jskennedy@shaw.ca for more info….

6.      Our August BBQ
Jim Kennedy said that everything should be ready to go by Wednesday, August 7, 2013, the date of August 11th @ Lions campground in Devon, in the gazebo is the date. All 2013 PAID members &  their Families are welcome.. More discussion at the Aug.7th Meeting..

Jim Kennedy said that all money spent on our Annual Show and Shine could come from the  sponsors, and again he doesn't think the club’s savings account will be affected..

7.      The Club’s New Website
A report will be given by Kellen Kennedy regarding our new website.  There have been 1,200 visits to our website to date, which means that these people will be familiar with the fact that our Club is very active and has a lot of supporters.  He said that most of the people who have viewed our website are from the Edmonton area. Members have given the “Thumbs up” on the new site..

Clarence Shields is putting together a deal to have an American-style Truck-stop.  He said Americans would like Blackjack’s and not have to come into the City of Edmonton.  Clarence said he would advertise our presence at future monthly meetings if we change the location to Blackjack’s.  Blackjack’s are eager to have us meet at their premises in Nisku. And have indicated
That they will assist us with “whatever” if needed.

A Motion was then to hold our August  Meeting at Blackjack’s in Nisku, and to hold all future monthly meetings at Blackjack’s if things warrant this.  This Motion passed with only one objection.

Jim Kennedy noted that he was now officially Retired from his full-time job with EPCOR. CONGRATS  JIM !!!

He also said not to forget our August barbecue.  Everyone should bring some food and it is open to all members and their friends and families.  Brian Cherneske said that letters should be sent to all persons who want to invite friends so that they could use them to send to the invitees. This may cause problems so the membership has requested that only Paid members & their families could attend. Note: The annual Club’s 1/64 scale electronic drag races will be held also. Bring your Hot Wheels, Johnny Lightning or Matchbox cars.. Entry fee is $5.00 per persons & there are 4 classes..