About the Edmonton 567 Car Club 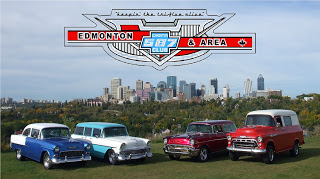 Previously known as the Fifty 567 Club, the Edmonton and Area 567 Club is one of several regional chapters of the parent group (567 Car Club) originally ofunded in Saskatoon, Saskatchewan. The roots of our Club began in the 1970's among the various chapters that were "dotted" all over the Western Canadian provinces.

In the year 1999, the Edmonton Fifty 567 Club (as it was then known) had played Host to the last "Western Canadian Meet", A weekend long event that brought Tri-5 Members from all over Western Canada to one location. This event had a convention, car show, swap meet & Beer! That was the Last one ever, as shortly after this event, the Head office that was based in Saskatoon had folded..

However, the Edmonton Chapter decided to "carry on" with our beloved Tri-5's and formed what is now "The Edmonton & Area 567 Club". Many Thanks go out to our former President, Claude Lavoie, who envisioned the idea of keeping the Tri-5 Interest in the Edmonton area going.. The main goal in our Group is to maintain the Support, Promotion, Restoration & Preservation of the Great Chevrolets from 1955, 1956 & 1957 including the Chevy/GMC trucks, Corvettes & Pontiacs of this Fantastic Time period.

We are Dedicated to the Tri 5's Chevys of the FIFTIES !! You may have seen our Club at various Swap meets around Central Alberta.. The Edmonton & Area 567 Club today has a long maintained membership and is steadily growing ! We currently have members from all over this Great province and new members are always welcome!

Having a Tri-5 Vehicle is not a requirement to be a member of this prestigious organization, but rather if you have an interest in, and a nostalgic love for, CARS with Chrome - this club is for you.  We hold a regular monthly meetings & present several events though-out the year, including shop/garage tours, BBQs, Cruises, an Annual Swap Meet & of course the Annual Charity Show N Shine, which is held every August..


Since our club’s re-established status in 2000 we did have some success in a annual drag race event dubbed “ The All Chevy Shoot-out” in which the $$$’s earned were then donated to the STARS foundation & Kids with Cancer Soceity. We attracted numerous racers from the Edmonton area & beyond but as fate happens, our success to this event lead to high costs for which we the club & sponsors could not afford.

Hence, we decided to promote the daily drivers and numerous show quality vehicles in a show n shine event that is going into its 19 year, dubbed “Bowties vs the World”. All the money generated from this event are donated to various Children’s charities such as Kids with Cancer, Be Brave ranch & Edmonton Autism Society, just to name a few. It has been said by many that it is the “Best little show n shine” in town. This event occurs at the end of August each summer & has many contests/raffles going through out the day, and everyone in attendance has fun!!!  Come join us!

There is a pie eating contest, sparkplug changing contest, shop creeper drag races just to name a few and also a picture of your entry is taken and given to you as a “keep sake” as well. You can become a member to our club anytime, and everyone, is Welcomed!!!! You may even see the car club at many Swap meets & show shines during the Cruising Season.

If you are interested in joining a form will be made available soon, however you can inquire about dues, benefits and anything else by contacting Jim by phone @ 780-473-4559, or by email at jskennedy@shaw.ca