The Quicktimes Swap meet was held on March 22nd and we were there!

Jim  & Don again manned our booth with help from Don’s daughter Becky and fellow member Shawn Green. It was a busy day and it had its moments. The raffle was a great addition....

We even had a celebrity drop by for a visit! (see the Pic)
Icepilots NWT’s very own Joe McBryan stopped by. Besides being the owner of Buffalo Airways, he is an avid “classic car collector” and we thank him for spending some time with us.

The other “pic” has Don.C ready for action...
The club will be a Drayton valley on April 19th for their swap meet.. Any one wants to assist Jim & Don, Let them know..
Check out a couple of pics from Red Deer... 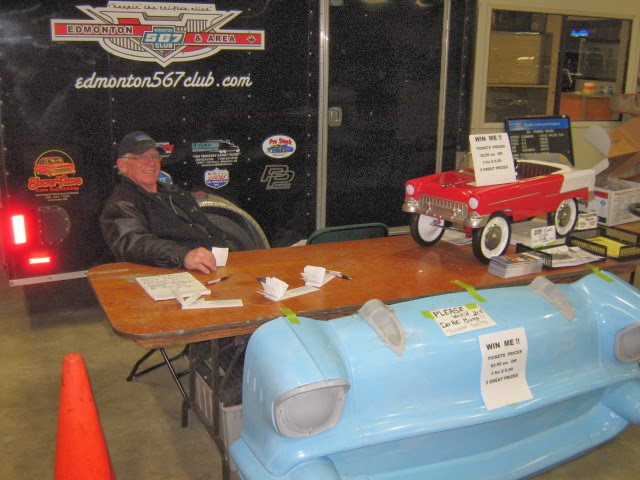 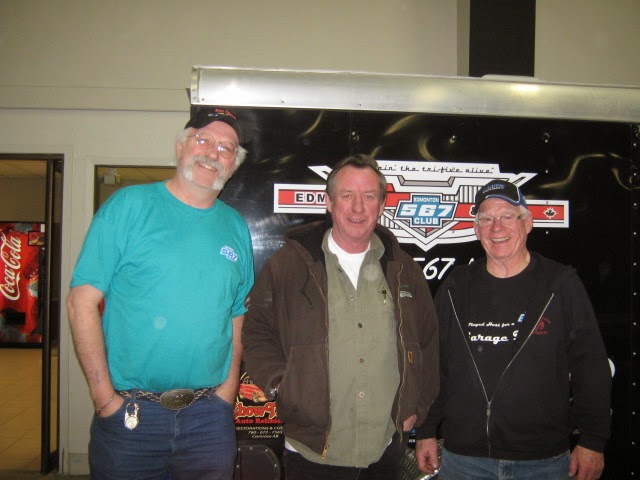 Recap
1. Minutes from Feb. meeting were read & accepted by the members.

2. The Treasurer’s report was present and accepted by the members.

3. Previous topics were discussed and some were carried over…Such as the status of a club secretary, club patches and aShop Tour of a Fountain Tire  on Yellowhead trail..

6. Jim has collected all but one trailer sponsor fee as of this print.. He will start seeking the sponsors for the Bowties vs the World S/S this month.. So far we have two solid commitments..
Sponsorship fees have increased by $10.00 per award.. First time since the event was started 14 yrs. ago that we had to raise our fees. The membership passed this decision..

10.The 2014 Bowties vs the World is on August 23rd & we could use door prizes and most important, SPONSORS !

11. April 2nd meeting we will hold a 1/64 scale drag race after the club meeting. Entry fee is only $5.00..So “borrow” your Grand kids or even your sons hot wheels cars & race!!! We had a Brief discussion about parts & projects .. Our 50/50 cash winner was Kellen K. 2nd prize was won by Daymion W.( club t-shirt) and the 3rd prize was won by Greg R ( Showtime Resto T-Shirt)

On February 19th, members of the 567 club were invited to a special prescreening of the new Dreamworks film Need For Speed starring Aaron Paul. Fun was shared by all, popcorn shared by some - and everyone who attended had a great time. Join the club to receive monthly newsletters, which does include the occasional perk like this one. Special thanks to Kasey Harkness of Dreamworks for supplying 20 Double-Guest passes to our club. 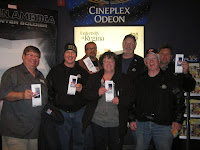 At the February Monthly Meeting member Kellen K ahowed a video he had produced showcasing the Dragracing History of Edmonton, AB. Recently he was contacted by an individual who had been a photographer in the past, thanking Kellen for "bringing back the memories". Below is the video for anyone who'd like to see it again

)
Courtesy of Freak and Nitro TV

1. Minutes from Jan. were read and reviewed .. Minutes adopted and passed by members..
2. Treasurer report given & passed by membership.
3. Advertising/sponsorship on Club trailer was discussed..Only Competition Ins. & Lesco to be received.. The Sponsorship fee is $100 and up.
4. The swap meet idea was discussed and No further decisions were made. Final discussion to be made at the March meeting..
5. The Club raffle is underway, most of the membership have tickets to sell.. The prizes are purchased..
WE NEED ALL MEMBERS TO ACTIVELY SELL THEIR TICKETS !!!
6. Club will have a table at Red Deer to promote the Club & raffle...
7. Club elections were made and results are : Roy M Club Prez, Daymion W. V.P, Treasurer Jim K., Club membership Don C. ( Gene B. to assist) the club secretary will be open ( any given member at a meeting will be called upon to record the meeting)

NEW BUSINESS
1. Our website recorded 1380 hits for the month of January, which is pretty good for offseason. The number is up from 800 in December.
2. Our club received 20 double guest passes for the Movie “Need for Speed” Preview on Feb 19th by Dreamworks/Disney Prod... We received 10 responses for these passes. Email was to be sent out to all members to reserve their passes to Jim..
3. If possible Jim K to look into getting 10 X 6 inch “club patch” done.. May have info on this at March Meeting...
4. Shop tour at Fountain Tire ( 82st/Yellowhead Tr.) is being planned.. Jim to arrange this and pass on further info @ March Meeting.
5. Require Volunteers to work at the club’s table in Red Deer on March 22/2014.. Please contact Jim if you can help out..
6. Waiting for the Dayton Valley people to contact us on their Swap Meet in April..
7. We are confirmed for the Antique swap meet in May @ Red Deer, we have a location for the trailer plus 3 tables..
8. Don C. had a discussion about a Cruise to Ma Me O beach to attend a Dance with a Oldies band playing.. Further discussion at March Meeting..
9. Another 1/64 scale Drag race is slated for all club members and their guests for the April meeting,  $ 5.00 entry fee..
50/50 was won by Gene B. & 2nd prize won by Jim K.
Meeting over at 8:30  Next meeting March 5th @ BlackJack’s Roadhouse.. Nisku AB @ 7:00 p.m
Note: Kellen K had two DVD’s to show after the meeting ( history of Drag Racing in Edmonton & Old footage from the days at Speedway Park) that he produced..